Training report: 2/12. In a word: Impressive. Someone asked me who impressed me the most, I said Walsh without hesitation. Does he have a ceiling? Could have his own Great Glass Elevator.

Session started up with fitness drills, nothing exciting. We then spent a lot of time on foot skills, pinpointing targets under pressure.

Cripps and Levi started the session with goal kicking technique. In windy conditions, they did a drill of deliberately hitting the goal post from 20 or so. That would prove that proper contact is being made.

The group then split up into 2. Group 1 worked on boundary line throw ins in 2 teams, working the ball to their respective key forward target. Throw ins also turned to ball ups in the same drill.

Group 2 worked on Centre clearance problem solving . The drill was to clear the ball for your respective team, handballing to their target at one end of the circle. It was up to the players to work out a solution on how to get it their. The only rule was no kicking. They had to work out when to use foot speed and when to use team mates via handball.

These two sessions went for a significant period, ending in goal kicking – quick snaps off either foot under pressure.

Doc and Marchbank were doing their own fitness routines on the sidelines. It was a tale of two stories. Doc is moving across the ground very well, looks super fit and confident in his knee. Marchbank left the ground at 10.27 shaking his head. Hopefully only out of frustration that he can’t join the main fun.

Speaking of fun, Eddie really looked like he is enjoying himself. For the record, he was working mid in the Throw in drill and moving really well.

I stood next to Eddie at the cafe. He looks physically and mentally fit. Anyone who thinks he has lost a yard of pace – just wait.

One thing that I omitted from the last report was part of the Group 1 drill – throw ins and ball ups. There was a real emphasis on that ‘last kick in’ and making the correct choice on where to position the ball – in front, over a defender to the back, or wrong footing a defender to pop it to the side.

Newb Report:
Philp – He looks like he has the body size to go round 1. Exceptionally quick, but I didnt see much of his disposal to rate.
Newnes – Is a big body. I only saw him kick it once aand it was a grubber.
Martin – I only saw him running laps. But looks as fit as a fiddle. A lot taller than I thought he was and a lot broader of shoulder. I wonder if he is just working off a bit of a soft tissue niggle from end of season.
Ramsay – still looks a little slight, but like Fisher – doesn’t take a backward step due to his size. Very keen to see how he and Philp develop over preseason. I think the base is there.
Pittonet – A ruckman really. Nothing poor or remarkable to comment.
Other player notes:
Dow – looks good. Spoiler Alert – he is not currently in my best 22 and wont be until he can demonstrate consistent, quality delivery by foot in a match situation. If he gets that right – straight in.
Weits – Is a man mountain But in a good way. Scary big, scary fit, scary quick of the mark. Great reader of play. Watch out.
Kennedy – Ive never seen him fitter. Write him off at your peril
Cuners – was smashing them inside and out in the aforementioned Group 1 drill. Could be his year (please stay fit…)
Ed Curnow was also moving very nicely through mid and looked dangerous by hand and foot.
Finbar – Played a bit of Key Forward on Weits. Weits out bodied and out thought him every time. It was getting a bit awkward, so they moved McGovern onto Finbar. To Fins credit, he has a really nice double step to get onto his left to give himself time and space to go for goal.
Fisher – looks like a boy no longer. has more body size and is just gifted with ball in hand. Disposal is pinpoint.
Levi – spent a lot good portion of time working on goal kicking technique – which would suggest he is the replacement for Charlie. Levi really working in getting the right hand closer to boot on release. Imperative for a windy day like today.
Wiliamson – moving unhindered, looks fit again. I will be following him closely this preseason
McGovern – I mentioned him earlier, but almost missed him because I could not recognise him. Lean and fit as. Very active and using his voice a lot.
Setts – one of my favs. All I can say is thank god we havent overpaid someone to come into a mid role. We are going to need to set aside big dollars for this boy in the future. Note: he did some extra work 1 on 1 with a coach on reflexes below the knees. Watch out for him.
TDK – Now has the upper body to match the rest of him. Was competing very fiercely and took some nice contested marks. Still developing but the obvious talent is there.
Stocker – working extremely hard. Interesting to note that he finished later than most. Firstly working hard 1 on 1 with a coach on his goal sense (bit of forward time coming?). Secondly – and this impressed me the most – talking to the coach saying – this is what I need to practice next and instructing his own drill.

Overall, JR was back in his element!! 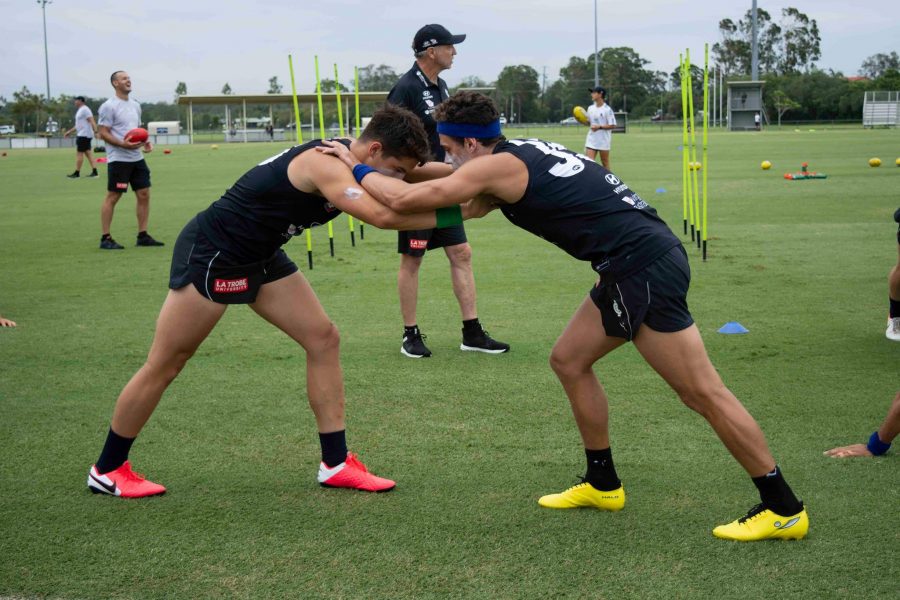 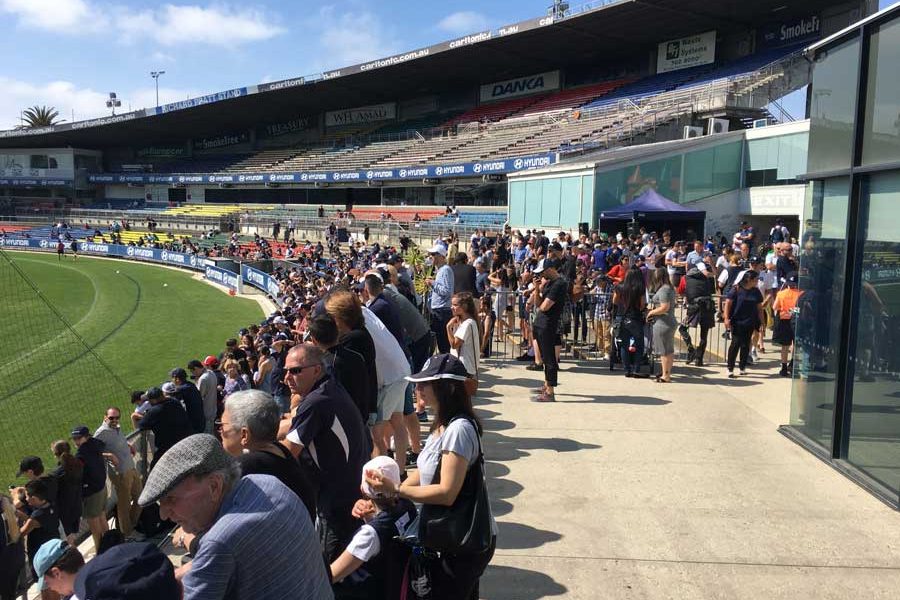